LAND OF THE GIANTS

In 2018, Land of the Giants celebrated its 50th anniversary since it first aired on 22 September 1968. Produced by the "Master of Disaster" Irwin Allen between 1967 and 1970, Land of the Giants was the last of the four science fiction series produced by Allen during the 1960's. These shows coincided with Man's ventures into space, culminating in the Apollo 11 mission to the Moon in 1969. This mix of science reality and science fiction in the late 1960's inspired a whole generation of children in their future careers, whether in science or the arts.

During that time, astronaut Gordon Cooper amongst others visited the set of Land of the Giants as shown in the photograph below (with Don Marshall, Irwin Allen and Deanna Lund):

Whilst the world has changed much since then with very different challenges and priorities, all of Irwin Allen's shows still hold up well even today. The quality of the effects on shows such as Land of the Giants has rarely been surpassed in television since then, despite the much greater access to computer visualisation which dispenses with much of the mechanical effects that Irwin will have employed.

Irwin Allen made considerable use of blue screen effects and expensive over-scale props and these effects were very impressive, particularly in scenes such as the one below from The Inside Rail where the "little people" talk with a giant.

Whilst a product of the 1960's with the ladies fashions definitely of a different era from now, the stories and the production qualities of this show tell as well today as they did 50 years ago. All of Irwin's shows also have an almost magical, fairytale quality to them compared with today's hard-hitting, reality driven shows. Much of this is due to Irwin's almost childlike appreciation of good old fashioned story telling.

After a very long wait, the much anticipated DVD box set was released in the US in mid-2007 much to the delight of fans worldwide, and it is a worthy purchase for any television or science fiction aficionado. 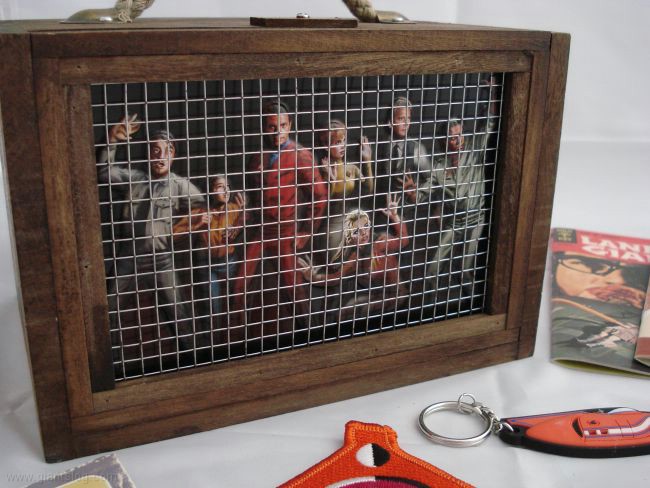 The cast of Land of the Giants have often been guests at events around the world and if you have an opportunity to go sometime, you will not be disappointed. They have always been warm, charming people and well respected by all who meet them. Visit the IANN and Giants Log convention and events pages for more on past events. Below is a picture from Deanna Lund of the cast at the 2008 ScoutCon convention in May. Click here or on the picture below to see more pictures and reports.